Deep Learning in Image Recognition: Making it into a Futuristic World 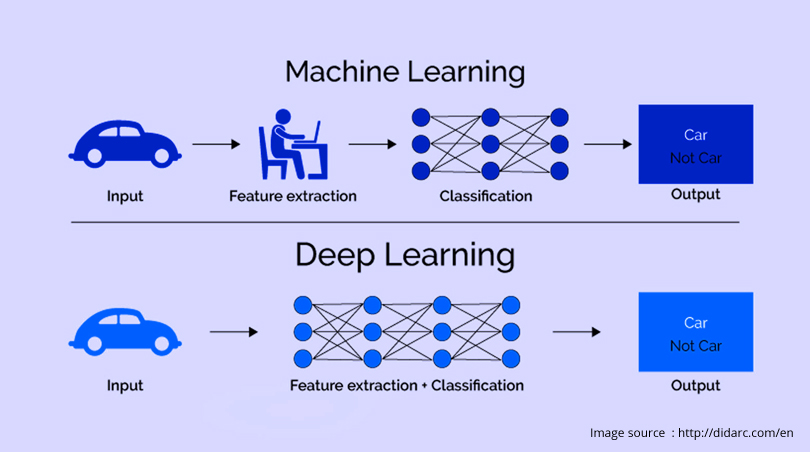 Have you ever wondered how does your latest Smartphone scans your face to unlock the screen? Well , the tech behind this facial recognition in our smartphones, as well as other similar technological innovations like autonomous modes in self-driven cars, diagnostic imaging in healthcare etc which have made their mark in recent years has one thing in common; Image recognition technology. Computer vision of which image recognition is a part uses computers to make accurate decisions based on what it “sees” while sensing the objects in front it. Deep learning in image recognition has a very vital role to play. In fact much of the modern image recognition based innovations are heavily reliant on deep learning technology.

In image recognition, deep learning works with a class of its neural networks, known as convolutional neural networks. A convolution is the combination of two functions that produce a third function. Therefore a neural network which uses convolution is merging multiple sets of information, in order to pool them together to create an accurate representation of an image. After pooling, the image is describedin lots of data that a neural network can use to make a prediction about what it is. Computers can then apply that prediction to other applications, like unlocking your smart phone or suggesting a friend to tag on Facebook.

It requires a lot of time and training for the neural networks to get their predictions accurate, as it is impossible for them to automatically know how to classify what objects are called in the real world.

The reason why image recognition is such a developed and widely used form of artificial intelligence is because of how developed the datasets are. According to Kaz Sato, Staff Developer Advocate at Google Cloud Platform “A neural network is a function that learns the expected output for a given input from training datasets”. Deep Learning model make use of these datasets to train and practice, making predictions from the information in a dataset and uses that experience in real-world situations.

A notable example of image recognition is ImageNet, one of the first widely-used image databases for artificial intelligence. For an AI application to be able to process such a large amount of information while using it effectively within a deep learning model, requires some very efficient processing power.

How does a convolutional neural network work in image classification?

As discussed earlier, convolutional neural networks (CNN), which is a class of deep learning algorithm, are used when it comes to image recognition or image classification.

Some of the most popular uses of CNN:

The main objective of image classification or image recognition is to accept the input image and the following definition of its class. In human beings, this skill of classification is learnt at the time of birth itself, enabling them to easily identify the image in the given picture. But on the other hand, the computer sees the same picture quiet differently.

Instead of the image, the computer sees a series of pixels. For example – if image size is 300 x 300, then the size of the series for the computer will be 300x300x3 (including RGB channel values along with the height and width of an image)

With the help of groups of convolutional layers the computer constructs more abstract concepts. The image is passed through a series of convolutional, nonlinear, pooling layers and fully connected layers, and then generates the output.

Some of the well-known APIs for CNN are:

With image recognition technology in action, we are actually ushering towards a futuristic world where science fiction is close to becoming a reality. From self-driven cars to creating augmented reality, almost everything is possible. Combined with AI and deep learning algorithm the possibilities are practically limitless.

At IDS we are also exploring the world of deep learning in image recognition and helping our customers to have a futuristic solution for their business.